As new technologies provide more data about patients and their behavior, how far off is the payoff through lower drug costs? Genomics is one of the technologies believed to hold the greatest promise for more efficient pharma R&D but other digital innovations may be having a greater impact, at least in the short term. The topic was discussed at the Health Evolution 2018 panel, “Innovation: Savings Lives or Shifting Landscapes,” moderated by Toby Cosgrove, former CEO, Cleveland Clinic.

“One of the biggest issues in pharma is always the cost of failure,” she said. “So one of the best things that 23andMe could do is actually help decrease the cost of failure. If instead of 9 out of 10 drugs failing, we instead had 7 out of 10 drugs failing, costs would go down. The hypothesis is that by having all of this genetic data, we will actually make drug discovery more efficient.”

Olivier Brandicourt, CEO, Sanofi agrees that genomics has long term potential to improve the drug discovery process but he is seeing greater impact from the use of other digital technologies to help improve the effectiveness of drug trials. He told the audience that the biggest factor driving down the cost of drug discovery is on the clinical side.

“The programs which are delayed are always delayed because of recruitment which is not going at the appropriate pace,” he said. Sanofi is finding success in reducing the length of trials with new digital technologies such as social media and distributed trials.

“It’s a newway of doing clinical trials, where the patient stays at home,” he said. Visiting nurses and iPhones are used for data collection, expanding the base of participants by sparing them from long trips to medical centers. He cited a trial that is underway with Science37, which facilitates digital clinical trials.

Brandicourt does see strong potential for genomic data to reduce costs at some point down the road: “it has to be industrialized.” 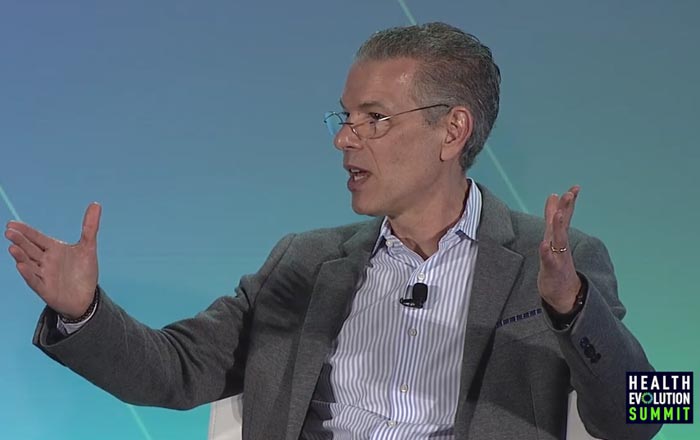 So far, 23andMe has sequenced genomic data from more than 5 million customers with 80 percent agreeing to provide their results for use in research. The company says that each individual’s information is contributing to over 200 different research studies, on average.

23andMe is not the only organization building a pool of genomic data from the public. The All of Us Research program from the National Institutes of Health (NIH) has set out to collect genomic data from one million or more participants with the purpose of making it available for research. And Geisinger has setup the MyCode Community Health Initiative which has more than 190,000 participating patients.

One of the founders of the MyCode intiative, David Feinberg, said the availability of genomic data is already producing actionable data with current drug therapies.

“We’re finding about 3.5 percent of people have a medically actionable condition that has a very high penetrance that we can do something about,” he said. “Half of the people that we’re finding BRCA positive would not be found in routine clinical care because they didn’t have a sister, or the sister died early.” He also cited cases where Geisinger had used genomic data to diagnose conditions in patients that went far beyond the symptoms presented in the exam room.

“We saw a 16-year-old girl who came in dehydrated from soccer, so we gave her some fluids,” he said. Through the MyCode program, genetic results came back showing two genes associated with fatal cardiac arrhythmias in young athletes. The information helped identify what was potentially her first cardiac event, leading to more appropriate care than would have been possible without the program.

While acknowledging that that there are not enough analytic findings yet to conclude that genomic testing is cost-effective, Feinberg is a strong believer in its clinical value. He left Geisinger in late 2018 to join Google Health as vice president and is scheduled to speak at the 2019 Health Evolution Summit.

“It helps us predict whether a clinical trial will be successful or not, and sometimes, we are just not doing the test, saving costs, because those models are telling us not to do it,” he said. “Ultimately it’s going to lower the cost of development.”