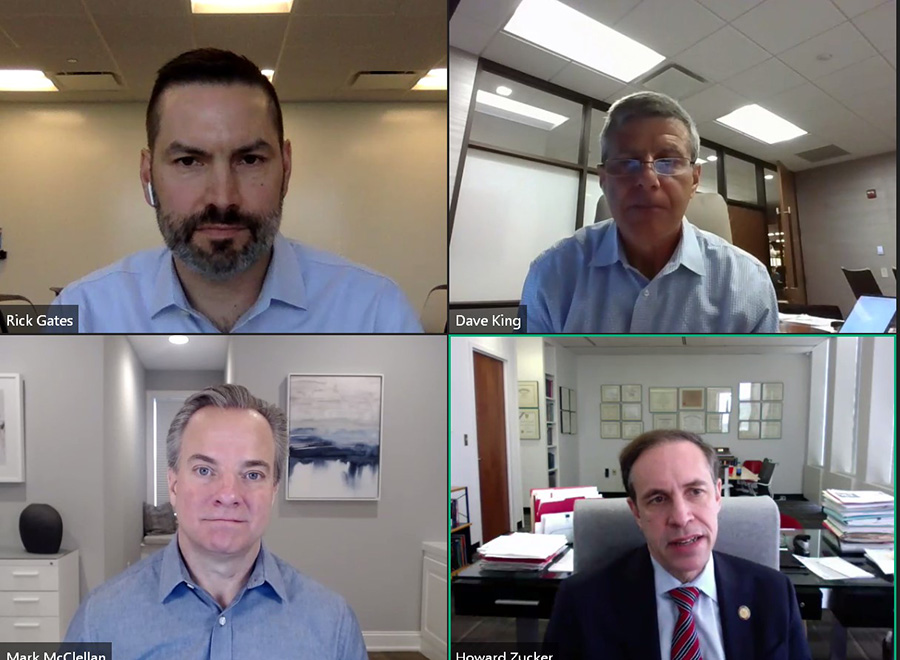 Introduction
While every U.S. state is undertaking preliminary steps to reopen local economies, it is too soon to understand what data, including infected cases and deaths, will reveal about those initiatives.

Amid ongoing uncertainty, Health Evolution held the Pandemic Response Series COVID-19 Phase 2: Charting a Path out of the Crisis webcast to convene CEOs and policymakers for a discussion about steps the U.S. needs to take to not only reopen as safely as possible but, equally important, to be ahead of future surges should they arise.

This article, based on the Health Evolution Pandemic Response Series COVID-19 Phase 2: Charting a Path out of the Crisis, will explore the following:

Testing, tracing and surveillance
As COVID-19 initially reached the states of Washington, California and New York, it became immediately clear how critical testing, tracing and surveillance are to battling the virus. Since shelter-in-place guidance took effect in the middle of March, in fact, specific regions of the U.S. have cooperated — but such alignment is not yet common.

“Collaboration is driving COVID testing, accelerating the understanding of the virus, making sure there are products, support, and care for the people in the communities that we serve,” Gates said.

King provided an update on three types of testing: PCR to detect the virus, serology to detect antibodies and antigen to detect pieces of the virus.

“The challenge is the PCR testing ramp up was slower than anybody would have liked,” King said. “The serology capacity is quite high and it’s not difficult to perform serology testing.”

That said, determining exactly what serology tests mean is another matter. King said pertinent questions include what level of antibodies are meaningful? If there is immunity, how long will it last? Will some individuals become equipped with so-called immunity passports?

Another option is point-of-care rapid testing. Valuable in urgent care, these tests are not scalable for testing people every morning before work, for example, and the error rate is relatively high compared to laboratory testing.

Because of asymptomatic transmission, false negatives are a more pressing concern than false positives, at least in terms of risk to the community.

Zucker said New York has conducted some 1.5 million tests, currently has the capability to test 40,000 people a day and is increasing toward 80,000. The state has also sampled 15,000 people with antibody testing and determined that 20 percent have antibodies in New York City while 12 percent across the state do.

“This is an unprecedented effort around both testing and tracing and the more general containment side,” McClellan said.

In mid-May, New York state partnered on a contact tracing initiative with Bloomberg Philanthropies and Johns Hopkins School of Public Health. Zucker said the state will need thousands of people to perform tracing but he expects it to be effective in helping public health control the pandemic by collecting data about who is positive.

Adequate testing, tracing and surveillance will be critical for New York and every other state to safely reopen.

“As more point-of-care tests come online and we use our high throughput PCR capacity more efficiently, we should be able to get to five or six million per week in the next few weeks to months,” McClellan said. “Getting those tests actually used effectively is going to be the bigger challenge, not just access to tests, but making sure that everyone who has symptoms does reach out to get tested and has a convenient place to go, that knows how to do it.”

Reopening economies safely
Gates noted that the criteria for reopening varies by state and is, in many cases, undefined — particularly at the regional level. White House Coronavirus Coordinator Deborah Birx, MD, issued federal guidance in a framework that includes waiting for a two-week decline in the number of cases, reduced pressure on hospitals, significant surge capacity in the event of another wave of infections.

“Most states that have started reopening did so before all of those criteria were met,” McClellan said. “Those criteria are important.”

At a bare minimum, public health officials are looking at hospital numbers, notably admissions, as well as different populations to detect how many people are positive and whether that is changing.

Zucker pointed to New York Governor Andrew Cuomo’s concept of a valve, wherein state officials open up on a limited basis then, if that works, open a little more — always measuring and being prepared to turn that valve back if the number of cases again starts rising.

“There’s a whole spectrum of what is the beginning of what you do to open up, and then see how people do with that, and then open a little bit more,” Zucker said. “This is something we haven’t experienced before, and it really is about tracking stuff, not just about data.”

While New York is coming down from a significant peak, McClellan cautioned that the decline in cases nationally has not matched New York because other states and regions have not reached that high of a peak. Either regions shut down early enough, before COVID-19 was widespread, or they experienced an increase in cases that was not threatening to the local health care system. As a result, governors of those states are under political pressure to reopen.

“That doesn’t mean they’re in the clear. It’s too early to tell about the impact of recent reopenings,” McClellan said. He added that all states need to improve testing and tracing, which by many estimates will require as many as 700,000 people for even partial tracing. “Most states just aren’t there yet. They have plans to get there, they have plans in place to get the testing up.”

King added that to date there has not been particularly effective coordination in terms of how to get the testing where it is needed.

“In the reopening phase we have to be able to rapidly deploy testing, to make sure that in the case of another outbreak we can move to containment, as opposed to falling back to mitigation,” King said.

Monitoring early warning indicators of future lockdowns
Once regional, state or the national economies are open again, even partially or in a phased approach, states will need to be vigilant in monitoring ongoing activity to understand when infections are rising or a new surge is approaching.

“The key point is what to track and how to know when to turn back? And what the earliest indicator is to turn it back, so we don’t get too far along and then find out, ‘Oh, we should have turned it back, two, three, four days ago,’” Zucker said. “This is about metrics and really tracking and looking at the numbers and looking at the math and trying to figure out, what is that percent?”

New York considers the rate of transmission, surveillance data as well as information on hospitalizations, other visits to doctor’s offices, and ambulatory surgery centers as they resume elective surgeries.

“It really is an orchestrated effort among many different players, because one thing this has taught me is how integrated society is,” Zucker said. “We have the health system, but it’s tied into so many other things. If we do one thing, it has an impact on something else.”

What to expect in the new normal
Experts agreed that digital health will be the new normal — whether via telemedicine, apps, sensors, fitness trackers or other tools.

Zucker added that digital tools will be complementary to what clinicians provide in that consumers will more regularly use them for managing their own health overall and, as a result of the pandemic, that will transform how medicine is practiced because people will grow more accustomed to remote care, such as monitoring vital sings virtually, than they are today.

That is not to suggest a switch will flip after which every American will be using digital tools to manage their health. Data fluidity is well-understood to be major challenge, for instance, and COVID-19 has proven that to be the case.

And while McClellan acknowledged that the industry is not effectively enabling various sources to share data today, he also said that health care organizations should be at the forefront with worker screening programs, supporting people working from home and establishing sound business practices in both realms.

“It’s digital on multiple fronts. Data that people can use to track their own symptoms and connect either through their physician or directly to get a test and then get advice on what they need to do based on the result of the test,” McClellan said. “It’s tools that businesses are already starting to use at a large scale to help their work force come back safely.”

Conclusion
The U.S. fell behind in pandemic response at the beginning and has since been challenged in every stage of COVID-19 spread. The nation has never before had to ramp up testing, tracing, surveillance and treatment at such as a massive scale, which has made catching up more difficult.

Among the realities that COVID-19 has exposed is the criticality for states to more closely align with public health, labs and hospitals, in order to rapidly bring testing, tracing and surveillance where it can contain spread and, in turn, avoid further mitigation.

The industry and American public are facing enormous challenges and have yet to put in place widespread antibody testing, meaning even approximating herd immunity appears to be a long way off. Additionally, it remains to be seen what unknown issues will arise as more widespread testing comes online.

All of which point to greater need for a coordinated federal, state and local response strategy before the next pandemic.

“If we learned anything, it’s that there’s still a lot that we have to learn to implement as we go forward,” Gates said. “Collaboration across all is going to be key for us to really accelerate.”

Register to watch an on-demand recording of this webcast below.